No Google at School.

I heard late this week that the Education Department has
banned Google from school computers.

Is it to benefit the pupils and if so how? What ... no more easy,
quick research and referencing?

One can only wonder will this stroke of bureacratical genius
hinder the teaching staff as well as the students? What ... are
they going to re-open libraries in schools, send the kids back to
the books and remove computers from the libraries??

Do the decision making genuises think that Google is the only
search engine on the web?

Interesting too that not a word about this decision has been in
the media ... makes you wonder doesn't it?? We're living in the
computer age yet our future generation is being deprived of the
encyclopaedia of their era!!!!
at 10:31 pm 0 Comments 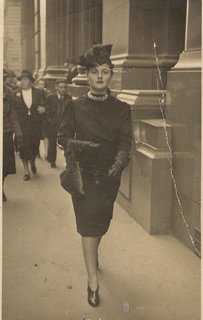 Doesn't she look the epitome of glamour for that era??

While still thinking about her today I dug out some clippings I
found in a 1950s Good Housekeeping book. I'd say they'd been
clipped from an English magazine and they remind me of Tess
and the way she viewed life which would have been influenced
by such articles.

VITRUES OF A DAY’S REST.
A day in bed is a remedy for so many ills. So many of us are
overworked and underpaid, and have to live from hand to mouth,
that it is small wonder our nerves are rasped and jaded sometimes.
We do not get enough sleep, we do not get time enough to eat out
meals, and we scarcely have time to breathe; certainly we have no
time to breathe fresh air. But just spend the day in bed with the
window wide open, give your tired brain enough sleep and spare for
once; take plenty of time over your meals, and your stomach will
rejoice and be glad. It will think the millennium has come if you lie
still after a meal and break your rule of bolting your food and bolting
to the station to catch the morning train.
Yes, a day in bed for the over worked.


LOOK AFTER THE EYES.
Eskimos will detect a white fox in the snow at a great distance away,
while the Arabs of the desert of Arabia have such extreme powers of
vision that on the vast plains of the desert they will pick out objects
invisible to the ordinary eye at ranges from one to ten miles distant.
Among civilised people says “Health” the Norwegians have better
eyesight than most, if not all other, as they more generally fulfil the
necessary conditions. The reason why defective eyes are so much on
the increase in this country and un Europe lies in too much study of
books in early life and in badly lighted rooms.

THUMBS LARGE & SMALL.
Someone has been telling the character of women by their hands.
It is said that women can be divided into two classes, those with
large thumbs and those with small. The first are supposed to be far
more intellectual, and have a natural taste for study. Small-thumbed
women have more romantic inclinations, and are very sensitive; they
are the coquettes, the women who will consider love above all things
and who fascinate no matter what their age. If a woman’s thumbs are
large her head will rule her heart, she will be a good business woman,
clear headed and tactful.

On this day, August 11 1921, Irene May arrived in the world.
The only child of Roy & Rene she had a more sad, than happy life.
Here's Tess (as her Dad called her after the heroine of the movie
"Tess of the storm Country") aged 14 in 1935 the same year her
Dear Dad was killed on his way home from work.
How sad she looked.
at 12:16 am 0 Comments

A How to Cure Asthma & Snoring Tip!

I got cheesed off with this blog, photo's wouldn't load, so I
spat the dummy, took my playlunch and left the room!

I'm over it all now ready for another round of blogging!!

The big tip for this episode is one I learnt from a wise friend
who has taken up the didgereedoo!

Did you know that circular breathing, the style you use when
playing the didge helps asthma and snoring??
Well that's the word ~ I can imagine lots of you heavy breathers
taking up the didge one day soon - Enjoy!
at 11:58 pm 1 Comments