The word for the week brought to mind one of my favourite movies Phenomenon the story of an ordinary man who sees a light descend from the sky and discovers he has super-intelligence and telekinesis. As much as I adore the movie and soundtrack I figured it was time to create my own phenomenon by not writing, for the third week in a row, on something to do with entertainment.

Perplexed, I considered some of my personal phenomenons. Survival, inner peace, total happiness, growing up when I got to 50, turning my life around, but ... that's the basis of the book! Nup, I wanted a modern day phenomenon, an observable event.

Then in the wee small hours a phenomenon occured. An Aussie guy, Cadel Evans became the first Australian cyclist, in the one hundred and fours years of Le Tour de France, to place. At 2 am I watched from my living room, Cadel finish second, with a twenty three second margin between he and the first place winner. I witnessed a real phenomenon ... Aussie, Aussie, Aussie, Oi, Oi, Oi!!!
at 2:57 pm 5 Comments

Tortie Love around the world ... 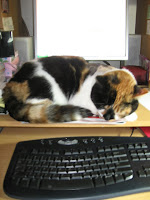 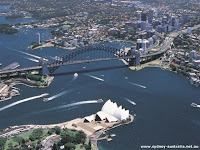 $55 to busk at Circular Quay.
$1,230 to close down a block of George Street
$160,000 to appear on the Anzac Bridge billboard
$1,200 to be married in St Mary's Cathedral inlcudes bells
$6,000 to watch the New Years Eve fireworks from your balcony at the Park Hyatt
$125 to run for Lord Mayor of Sydney
$11,000 to reserve a plot at Waverley Cemetery
$7,700 to dedicate a bench in the Royal Botanic Gardens wwwbgsyd.nsw.gov.au
No matter what the cost - it's one of the most beautiful cities on the planet!
at 12:35 am 2 Comments

What else could wicked be about except Wicked the New Broadway Musical! Where we'll be wickedly whisked to where so many wicked things happened before Miss Dorothy arrived!!

Wicked is wicked, looks like it’ll be wicked, with wicked story lines, about the wicked witches of Oz! How wicked can that be and how many wicked times can wicked be used in one paragraph?

This epitomises Wicked for me! How wicked it is that the wicked Sunday Scribbling gals gave us such wicked word at this wicked time … Wicked!
at 10:33 pm 8 Comments

Bewdiful Blossom ... can i has cheezburger ... 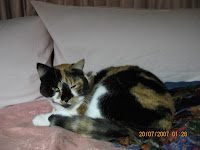 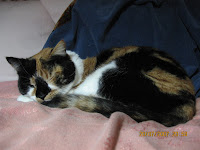 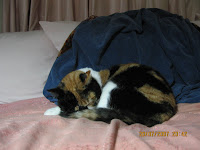 Thank goodness the camera work has stopped!
Hope she's not sending a pic of me to can i has cheezburger ... how embarrassment - what some cats have to put up with!!!
at 8:53 pm 0 Comments

Labels: Blossom, can i has cheezburger, cat naps
Email ThisBlogThis!Share to TwitterShare to FacebookShare to Pinterest 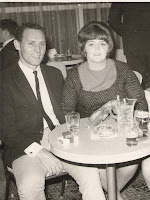 Looking good and so in love at the Oceanic Hotel, Coogee, 1965 where the drinks were Johnnie Walker 'Red' and water and Advokaat, Cherry Brandy, and Lemonade ... marvellous memories!
at 12:55 am 0 Comments 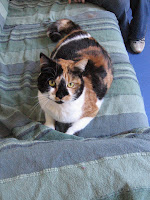 On Sunday I emailed the Vet telling them that 'One Down' had found a new home! The reply said they had a female, 'lap cat', 2-3 year old, desexed, tortie in need of a good home! Mention the word tortie and my heart skips a beat!

As soon as I read the reply I phoned to MJ (a tortie lover too) and within 45 minutes we were at the Vet's for an introduction! It was love at first sight! She was 'rescued' but they can't tell me from where or how and honestly I don't want to know! I took one look at her and she was mine! We spent time with her and I arranged to pick her up today! Yesterday she had surgery to remove a badly placed chip and to insert a new one. The Vet staff has named her 'Spot', not a glamorous name for a beautiful girl, so on Monday I re-named her Blossom - don't you love it??
I've been like an expectant mother. I've visited her each day, for the last three days for bonding.
Here's my little Blossom ... who has settled in marvellously, we're meant for each other!
Better photo's to follow!


As soon as I saw the topic HAIR the dilemma was do I write about how my mother had my long hair cut short as punishment for wagging school, when I was thirteen years old? Nah!
Do I write of my first hair dyeing experience when I came home and my hubby said I looked like I'd been hit over the head with a bottle of tomato sauce? Nah!
Or ...
"Gimme a head with HAiR, long bewdiful hair, shining, gleaming, streaming, flaxen, waxen ... remember that song ????

In June 1969 HAiR: The American Tribal Love-Rock Musical premiered at the Metro Theatre in cosmopolitan Kings Cross, Sydney, Australia, after a huge success on Broadway.

WOW how controversial! Sex, drugs, anti Vietnam propaganda and nudity on stage, live, in my home town. We booked tickets and a babysitter - how riscay. I'll never forget the cast walking down the aisles of the theatre, starkers, in the bol, nude naked with nothing on - yeah Baby!!

The Sydney Daily Telegraph critique was funny by today's standards.
The wowsers were up in arms, people protested outside the theatre. There was a bomb scare reacted to with little alarm in comparison to the seriousness of threats today! The songs were silly and catchy. In 2003 it was staged again in Australia, but flopped! How times have changed! 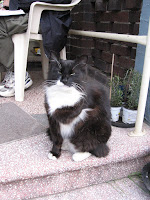 He was sitting on the step waiting! Wondering why the neighbourhood was out, glaring at me taking yet more photo's and looking questioningly, as to why no food was being served!
It was love at first sight, as if he knew it was meant to be.
As he was lifted up for a cuddle he rested his head in the crook of her arm. He took to her with no qualms, he knew!!! When it came time to go he walked into the cat box with only a little coaxing, no cattiness, no catatonic arguing or fighting!
I made it clear that if everyone wasn't happy he was to come back as there's other people who want to adopt him. As they left his new Mum said she'd ring the vet to change his home address, it sounds like the deal is done!
They were a really sweet couple, she has photo's on her phone of their three legged tortie, who'd died recently. The wait is over for the big, beautiful boy. He'll have some certainty in his life again he'll have a warm, loving and cosy home.
She'll be calling him by his real name 'One Down' ... I cried as he left!
at 7:51 pm 0 Comments

She was a grande dame of Bondi. For forty years she lived right on the beachfront in Campbell Parade, when Bondi was an ordinary working class suburb. Rene as everyone knew her, was my Grandmother, who insisted my brother and I called her "MiMi', today would have been her birthday!

She was outrageous! Before her time! In 1919 she'd auditioned to join the Tivoli, her Irish Dad, a burly butcher, said "No". Defiantly she found a job as barmaid at the Paragon Hotel that still trades today in Alfred Street, Circular Quay, Sydney where in 1920 she met Roy. After a short courtship they wed in September 1920 and in August 1921 my Mum, their only child was born. Mimi was a larger than life character in Bondi.

Widowed in 1935 she saw the bombs come over Bondi and by the time I remember her she drank 'Est' out of tea cups and had a 'boarder' we called Poppy! She was normal really!

Here's MiMi and Moi in 1945, at the fete at the War Memorial Hospital, Waverley, (where I was born) - both looking the epitome of fashion of the day ... gorgeous!

A month has gone by and the beautiful boy is still waiting. Every day I wonder is he waiting for his Dad to come home, for someone to adopt him or for me to feed him. He's wangled his way into my heart. Follows me everytime I go outside, but I'm being strong! Someone out there is going to give him a good home where he can reign supreme of that I am sure! 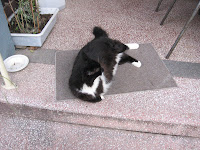 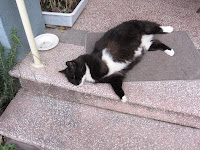 What Does Your Birth Date Mean?

Slippery : #67 Sunday Scribblings
The immediate thought was the Slippery characters I’ve known. The shonk’s, the shiester’s, the dodgie’s, the rip off artist’s who’ve stolen my goods and chattels. But ... then I thought of how more shonky the Slippery characters are who steal your heart, your trust, then, when you least expect it, they slither back to from whence they came.

Good riddance, their loss my gain, has often been my reaction. What a waste of energy Slippery characters are. To have been foolishly beguiled into thinking you’ve known where you stood hurts deep. To have generously invested rarely given loyalty to them, to have tolerated, yet treasured their childish, narrow minded opinions, along with the realisation that in the back of their tiny mind, they were surely readying themselves to bestow, a dose of their oft used Slippery, gutless tactic upon you and bugger off without so much as a courteous explanation ... should be celebrated with a resounding hip, hip hooray ... what a blessing!

To ease the hurt and appease the gut ache a good cure for an experience with a Slippery character is Slippery Elm. Traditionally used in Western herbal medicine to soothe and relieve irritation, this old North American Indian cure, derived from the bark of the Slippery Elm tree is known to alleviate heartburn by coating and ‘smoothing’ the irritated gastro intestinal tract. Especially marvellously healing when you’re sick to your gut from a dose of Slippery betrayal.

Enough dillydallying, no more analysing, no more pondering the hurt, I'm Over It, I'm grateful. Now for another dose of Slippery Elm, stick more pins in the doll and put that name in the freezer!!!
at 9:26 pm 6 Comments

I adore cake, am never over it, yearn for a fluffy sponge with lashings of cream but wheat is a no, no! A luscious cup cake has been seen in my clutches, but that's another tale!
Gluten and wheat free doesn't mean despair - years ago I discovered Rowie's when she was in East Sydney and at Fox Studio Markets!
Recently the gorgeous Rowie began creating close by! Everyone knows how strong I've been, looking the other way when I go by, how temptation has been avoided!
No more ... it's time to break out ... watch this space!
at 12:44 am 3 Comments 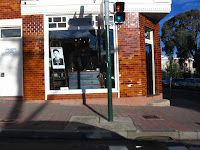 You can have your cake and eat it ... 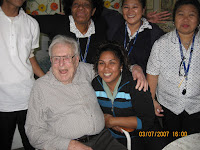 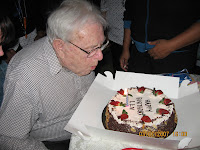 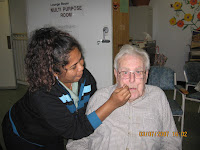 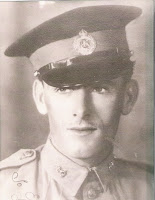 A Couple of Lovely Poppy's. 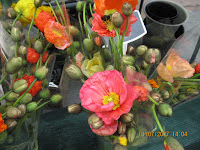 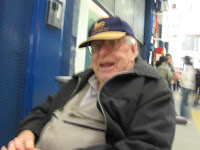